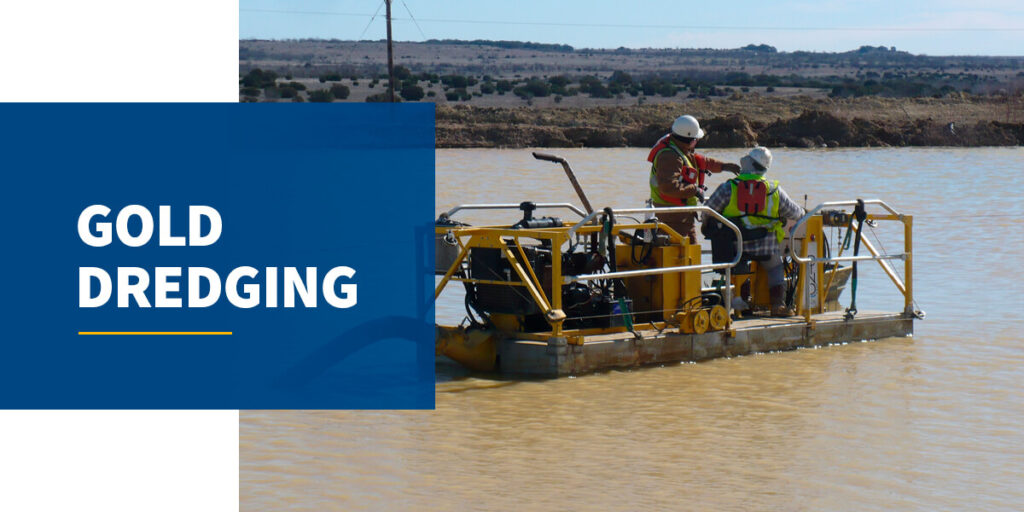 Dredging for gold is an old-fashioned mining method made new by modern technology. Since its resurgence, it’s become a popular way for small-scale miners to retrieve gold and other precious metals from public bodies of water. Additionally, dredging for gold using suction dredges can help the environment by removing excess sediment that can damage waterways.

This post will discuss everything you need to know about gold dredging, from its rich history to the best places to find gold using this method.

What Is Gold Dredging?

Dredging uses equipment called a dredge to remove sediment from bodies of water such as lakes, rivers and streams.

Here’s a brief overview of how dredging for gold works:

Past and Present Gold Dredging

Gold dredging has changed dramatically over the past century. From enormous structures stationed on river banks to the portable machines of today, this mining method has a long history.

The first gold dredges arose along rivers and streams. Standing multiple stories high, they contained complicated systems of heavy machinery that required a large team of operators to run. These dredges used a series of buckets attached to a moving line to scrape tons of sediment from the bottom of the water and carry it back to the building, where crew members would sort through it for gold.

The crew would then dispose of the waste material — known as tailings — by dumping it along river banks. These tailings piles would grow to ridiculous heights, sometimes even as tall as a multi-story building. In fact, you can still see many of these waste piles today.

While these machines made sense at the time, they were ineffective by modern standards. For example, they could only mine in one place, so the amount of gold that operators could recover was significantly limited.

The last giant gold dredge to close its doors was the Natomas Number 6 dredge in Folsom, California. It ceased operations in February of 1962 when operating costs grew to exceed the value of the gold recovered.

Since the 1960s, dredging has bounced back as a popular mining method. Modern dredges are far more compact than the original ones were, letting you mine in areas inaccessible to the giant stationary machines of old.

Many of today’s small-scale miners use amphibious suction dredges as their tool of choice, as they can drive them directly to the area they wish to mine. Hand dredges are another option, though they are significantly more limited in their reach. 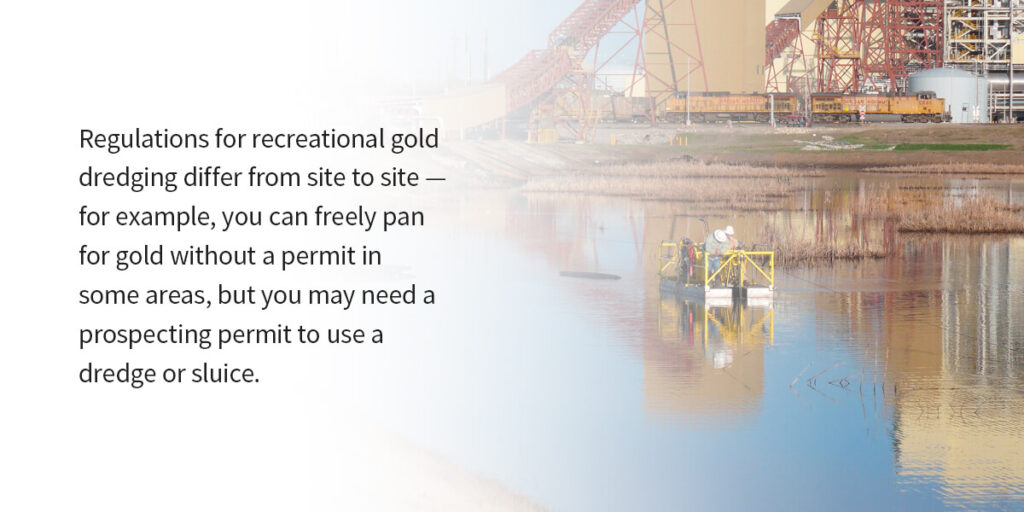 Where to Dredge for Gold

You can go gold dredging anywhere it’s permissible under federal or local law. Regulations for recreational gold dredging differ from site to site — for example, you can freely pan for gold without a permit in some areas, but you may need a prospecting permit to use a dredge or sluice.

Additionally, some areas may be off-limits at certain times of the year to protect the fish population during their spawning season. Be sure to check all state and federal requirements and notices before setting out.

If you’re looking to make a profit, it might be worth visiting another area. The five states richest in gold, all located in the western part of the country, are:

While you’ll have the best chances of finding gold in these states, you can still dredge for gold in other regions. You’ll want to focus on the following areas, as gold-rich sediment usually gathers here:

In general, miners usually have luck in areas where water flows slowly. Sediment the water picks up in other areas will lose the speed to move through the water there, causing it to sink to the bottom and settle until someone removes it. It can also be helpful to look for debris like logs and large rocks, as these objects act as natural filters that separate gold from other materials.

As you would expect, you’ll need a dredge to go gold dredging. You can choose from four types of dredges:

The type of dredge you’ll need will depend on the area you plan to dredge in. Research your intended site beforehand to learn what to expect.

If you’re thinking of beginning a small-scale gold dredging operation, you can count on us at GeoForm International to provide the equipment you need for success.

Our Dino 6 pontoon dredge is a uniquely portable system that we developed to perform where similar systems can’t. Its lightweight body is highly maneuverable, allowing you to work in lakes, narrow streams and many other areas that traditional excavators and hydraulic dredges are too large to access.

Need a little more power? We created the Dino 8 dredge system for mid-sized dredging jobs. Its 3,000 gallons per minute (gpm) pumping capability can pump further distances than other similar models. The Dino 8’s simple systems and components make it easy to operate, cutting your job time significantly and letting you get back to business.

Fill out our online contact form today for more information on our dredging products. You can also call us at 913-738-5373 to speak with one of our experts.